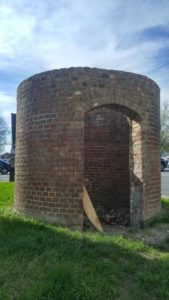 Across the street from Tom Biederman’s real estate office on North Main Street is a much older and smaller building he’s restoring: a pump house he believes dates back to the 1850s.

Biederman said he bought the property which now houses Green Street Gifts and Antiques, about a decade ago. He replaced the roof and windows of that building and most of the floor, but said he “didn’t really know what to do with the pump house, or even that it was a pump house. I didnt know what it was.”

He asked several people about the circular building and didnt get a definitive answer until a neighbor told him it was a pump house for the mill that had been in the building next to it.

“And it pumped water from Big Spring, behind the courthouse, up toward the mill. So at one time, there was a large pump in there, and I’m not sure what it used for its power, but I’m guessing it may have been motorized,” Biederman said.

Asked about a rumor that the building pumped water to city residents, Biederman laughed and said, “I dont know. The city might have been quite a bit smaller then.”

Biederman said bricklayer Kermitt Schaffer, whom he describes as a craftsman, begun work on the pump house two weeks ago.

“And I found him because he was restoring the brick here across the street at Quality Feeds, which is also a very, very old building, probably somewhat similar to the age of my building,” Biederman said.

Schaffer will complete the circular building, and a new door and roof will be installed in the next few weeks, Biederman said.

“It probably won’t be a dome, but it will be probably a pointed top, somewhat like the one on the corner here where my real estate office is,” Biederman said.

Biederman agreed that some will wonder why he bothered to restore a building with no immediate commercial appeal.

“Someone may do that, and I’ve thought about it very long and hard. I am a preservationist at heart, I think our history is important … even though the building will really serve no purpose other than a historical mark,” he said. “It’s a pleasure to restore it. It is kind of ironic that it’s behind a brand new building in Thoroughbred Square, so we’ve got brand new sitting beside mid-1800s, which I think is cool.”