The Oscar Performance at Honeywood: It’s a Winner 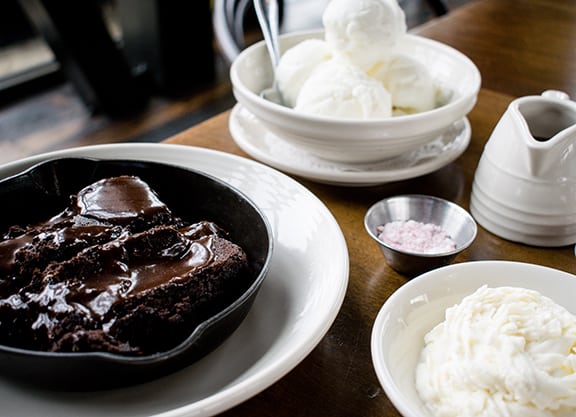 Headley Bell and his son Price have long understood how critical it is to let the outside world into Kentucky’s Thoroughbred farms; to expose that culture and lifestyle to the general public so that they better understand and appreciate it. As two of the founding members of Horse Country, and perhaps its biggest cheerleaders, the Bells grasp that the more understood and beloved the Bluegrass region’s farms and horses are, the better off all industry members will be.

So, in a unique promotion the Monday night before the Keeneland April Sale, the Bells launched a concept at Ouita Michel’s Honeywood Restaurant to keep their stallion Oscar Performance’s name on everyone lips–literally–with the debut of the Oscar Performance hot brownie sundae. The bonus: mention the promotion, bring in the ad from Monday’s TDN or a screenshot of it, or a card that the Bells were handing out at Keeneland this week, and the dessert is on them.

Bell explained that the idea is an extension of the Horse Country concept to keep the Thoroughbred industry in the forefront of people’s minds in the area, and to always associate it with a positive connotation.

“This community is all about the horse, and yet for the longest time, we haven’t let them be a part of that,” said Bell. “Horse Country has changed that. We want people to feel a part of this community and so this is just another thread, through someone like Ouita, who is so highly regarded, to come and share and feel a part of it.”

Anyone who has ever stopped in at a Mill Ridge consignment for a slice of their traditional Bell family rum cake knows that they love cooking, particularly desserts. Click here to link to full story

Register here! Forgot Password? Back to Login Return to Login